A Java aqueous washing and drying machine has been supplied by Turbex to a UK manufacturer of automotive transmissions, resulting in a three-fold reduction in the time taken to prepare steel components for heat treatment. A basket of, say, 30 parts can now be processed in typically 15 minutes, whereas previously the same job took about 45 minutes.

The reason for the former lengthy process was due to legislation in 2016 banning the use of trichloroethylene in non-hermetically sealed systems. It required the manufacturer to change to another solvent, methylene chloride, which turned out to be less effective at removing coolant residue from machined components due to an inferior vapour-only cycle.

If any trace of coolant remains, it can cause passivation masking during subsequent heat treatment and the component has to be scrapped. To avoid the risk, mechanical cleaning was added as an extra, manual process. Constant operator attendance was needed to hand-blast components one at a time with an aluminium oxide-based compound during both a day and a night shift.

It was arduous and expensive in terms of labour cost and was also time-consuming, which meant that bottlenecks could occur when feeding heat treatment furnaces from the single vapour blast cabinet.

Installation of the Turbex Java provided the ideal solution, as the machine is able to wash and degrease parts reliably to a high level of cleanliness before heat treatment. It is now no longer necessary to use the vapour cabinet at all. Dramatic time savings have resulted, especially when processing dozens of complex parts with intricate machined features, as they can now be batch-cleaned automatically in one basket.

A spokesperson for the transmissions producer advised that when the company changed solvent a couple of years ago, consideration was given to using perchloroethylene, which would have been more effective than methylene chloride. However as it boils at 121°C, which is higher than the temperature at which some materials on site are tempered, it could not be used. HFE (hydrofluoroether) was also evaluated, but did not prove to be a cost-effective solution for the application.

The improvement has been dramatic since installation of the Turbex machine, which allows batches of up to 40 parts to be processed in modular stainless steel baskets. Trials were carried out at the supplier’s technical centre in Alton to help identify the type of detergent (with corrosion inhibitor) and its concentration (fairly low to avoid staining) that would best remove coolant residue.

The machine is so efficient that pre-heat treatment cleaning is no longer a bottleneck at the factory, even though every component now goes through the aqueous process. A meticulously consistent finish is routinely achieved in a fraction of the time previously needed with solvent and manual blasting.

The Turbex system comprises two tanks, one for spray or flood washing in the presence of ultrasonics, followed by rinsing in RO (reverse osmosis) water. A patented feature of the machine is the ability to program the basket and spray bars to counter rotate, amplifying the cleaning effect and improving penetration of the water into difficult-to-reach areas.

Drying completes the process, either with hot air at ambient pressure for general use or by pulling a vacuum for more complex parts. The inclusion of the latter extends the cycle time by only around five minutes. 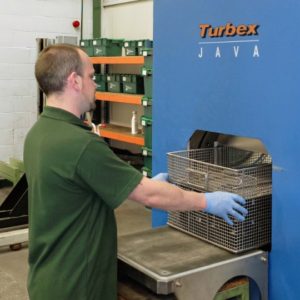 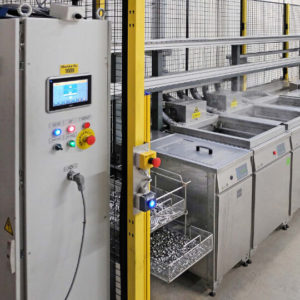 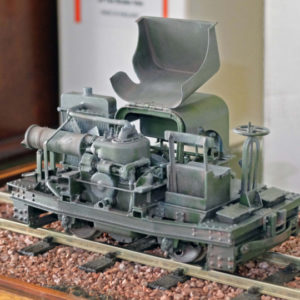 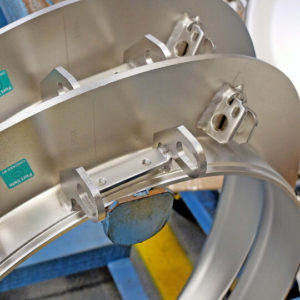 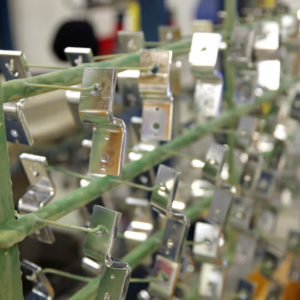 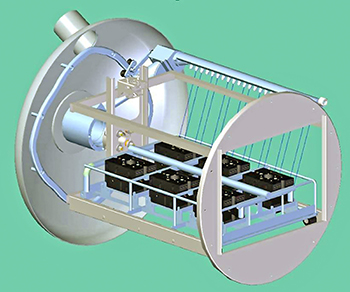 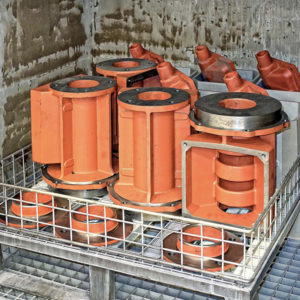